It will mount under most any wide body 1980s - 2015's TOMY bodies, as well as 1970's Aurora AFX, Magnatraction, G+ G-PLUS bodies as well as similar form factor manufacturers, such as those made by AutoWorld and Johnny Lightning. They also work Great underneath the Bob Beers release of AFX'tras and O-Goes-HO line of bodies. It will also fit under most any Aurora wide-base, Ultra5 or Speedsteer powered bodies. 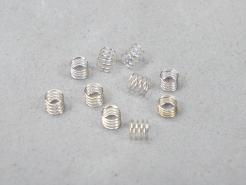